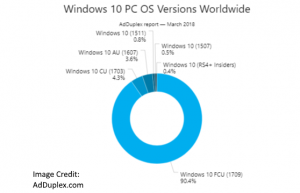 Just in time for the release of the Windows 10 Spring Creators update, Microsoft announced that 90 percent of the computers running Windows 10 have been updated with the Fall Creators update that was released in the fall of 2017. AdDuplex.com compiled the Windows 10 data into some interesting graphs. In addition to the graph used in this post, you can visit their page to see the Windows 10 Fall Creators update manufacturer breakdown, the deployment timeline and more. No other update has been deployed so rapidly, but since updates are not really optional it makes sense. Having so many users updated to the latest version helps with security issues and benefits the Windows 10 community of users over all. The more users there are on a version, the more that version get “tested” which flushes out bugs that need to be addressed. Look for the Spring Creators update to roll out next month which will hopefully address some those aforementioned issues. 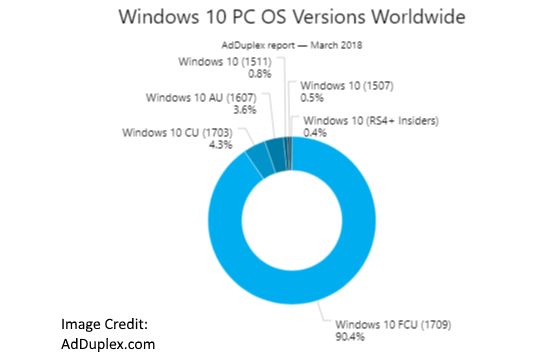