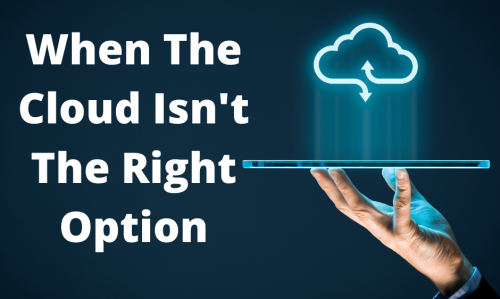 I am working on an upgrade project for a client that has outgrown their current infrastructure. Whenever possible we are moving away from using on-premise servers and moving to cloud-based options instead. This client has a line of business application that runs on an on-premises server and there is no cloud equivalent product even if they were willing to change. So, we considered whether it could run on Microsoft Azure, a powerful cloud computing service. Unfortunately, after doing some research we found out that their application will not run well in that environment and that it was not recommended much less supported by the vendor.

Was I disappointed? Yes. It is considered best-practice to move away from traditional on-premises servers, but only when it is the right decision. We already provide cloud-based backup for this client and the project also involves moving them from a traditional phone system to a unified communications system (VOIP) which is cloud-based. We are also moving them from an older version of Microsoft Office to Microsoft 365 which will give them cloud advantages as well. You should have an IT service provider that appreciates modern technology, but uses it appropriately according to your business needs.

Take away tip: if you need to make a purchasing decision about an application, seriously consider ones that are cloud-based. This kind of forward-thinking will help you be able trim your on premises equipment needs in the future.