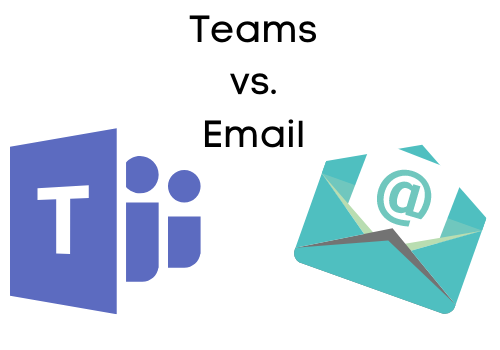 What!? Use Teams instead of email? Yes! I am not saying to completely stop using email, but there are several advantages to using Teams for business internal communication and collaboration. The first one is security. Around 90 percent of cyber attacks come through email in some form or another. Many of those attacks come from users outside the organization, but often the most dangerous emails use social engineering to lure their victim as they appear to be an urgent request coming from a coworker. Communicating internally using Teams drastically reduces this threat.

In addition to that, using Teams for collaborating on work is far more efficient that a string of emails. Here is an example that I am using in a presentation I am doing this week when discussing Teams. Imagine you and several other co-workers are discussing a topic or working on a project using email. Picture your inbox and trying to follow that conversation along with any attachments that someone shared. There are probably several other emails from other people in between, and even if you use conversation grouping settings in your email application, it is still cumbersome to follow.

Now, see how that same conversation might look in Teams. You can see that it is much easier to follow and it is in real-time. But, even if you were unavailable during part of the discussion, you could quickly catch up without wading through emails.

As with any new technology, there are learning curves involved with Teams adoption, but the advantages outweigh the temporary “pain” of change for most businesses. Book an appointment to set up a Teams demo or have Skyline IT Management help get your organization set up with Teams.