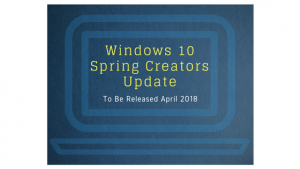 Microsoft has announced the release of the Windows 10 Spring Creators Update which will be rolled out to Windows 10 users next month. The version number of the April 2018 update is 1803. The update will take several weeks to reach all Windows 10 customers. You will probably notice once your computer has been updated, but if you want to see what version of Windows 10 you are using, right click the start button, then System >About and scroll down to the bottom of the screen to see your Windows Specifications.

With Windows 10, you can postpone an update so that the update happens at a time that is convenient for you, but you cannot postpone it indefinitely. Eventually your computer will update. Most computers will update without any issues, but some will experience a problem after an update. It is important to have a good backup of all of your data at all times but especially before a major update like this one, just in case something goes wrong.

Turning this one smartphone setting off can save battery power and data.#SmartPhoneTips #TechTipswww.msn.com/en-us/news/technology/save-your-phones-battery-and-data-by-turning-this-setting-off/a... ... See MoreSee Less